I'm sure you can guess from that title what I got up to today! I just loved Cyndi's post. I have done loads of obstacles with Linus before, much of them from the ground and the vast majority of them were for the RAC!! I have always loved watching the Extreme Cowboy classes though and one of my friends would like to get into it as well (Bernie with Lucas!)
So, today I squeezed in some time between helping out at the Post Office and my Chiropractor appointment! I didn't have a lot of time to gather stuff so I put together a rope gate, a tarp (held down by small snow boulders!) barrels to weave and a log tied to a rope to drag. Not quite the same as Cyndi did but all things I have seen in these classes! 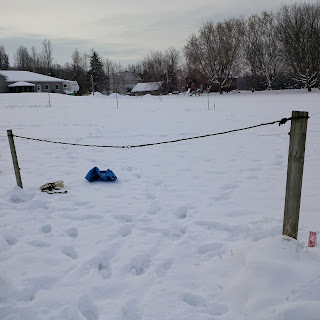 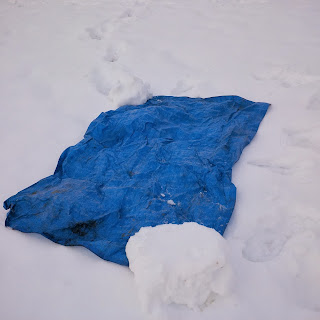 Our tarp held down with snow! Anyone who has done tarp crossing before should try it in winter if you never have! It really adds a different feel for the horse because the tarp sinks down more. Linus loves playing with tarps and soon figured out it was all good! 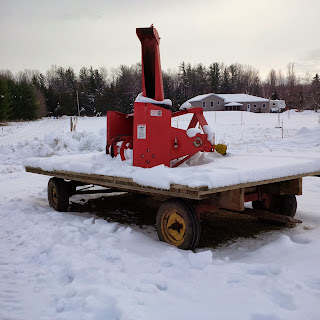 The snow blower and wagon I was talking about....also serves as my source for mounting! 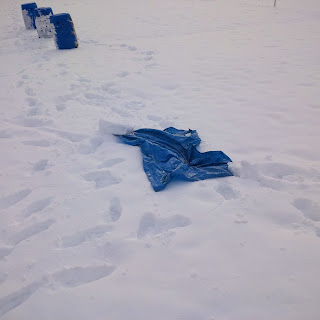 The tarp after Linus trampled it! I did not get a picture of the log but Linus did really awesome dragging it! I hung the rope over a fence post so I could reach it easily from his back.

He impressed the pants off of me when we did the barrel weaving! He gave me nice, tight turns and almost completely off of my legs! Woohoo Linus!
In between each of our obstacles I kept bringing him back to the rope gate. I can understand why he was hesitant. There was crusty ice (the kind that breaks even from a child's weight, but there was grass below that) so it was making him feel unsure and he had the idea that I wanted him to go under the rope. Which he made like he was going to do but I whoa'd him out of it. Finally, he settled and responded to my leg pressure and side stepped over enough for me to unloop the rope and walk through. He stopped on the other side exactly where I wanted him to but there's a rut on that side which I couldn't see so I didn't want him stepping near it. So I abandoned hooking the rope back up. I will come up with a better rope gate that is surrounded by good, even ground and no electric wire (it's not currently live) 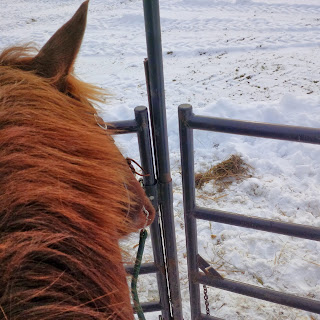 I rode Linus back up to his paddock and on a whim decided to try the gate there while mounted! You won't believe me but it could not have gone smoother!! He stopped exactly in the right spot, I reached down and undid the chain, shoved the gate open and he walked through and turned to face the gate again! What a guy! I think it was his way of telling me he figured out what I was first asking him to do! I love his work ethic with stuff like that. We're well matched in that respect! He will think about it until he has it figured out! 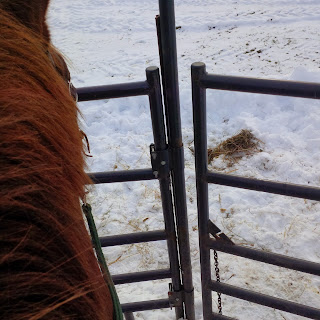 Unfortunately, our time had to be cut short today but we have rain in the forecast for tomorrow so I was happy to squeeze in what I could. I hate rain in winter! It messes with the nice, snowy cushion. Harold, I know you just got a good dump so could you please send it back over to me!!
Cyndi, thank you for the inspiration to get back out there! Just mentioning it to my friend (the one you met at the Pink ride) has us thinking about going to classes nearby and maybe even entering some classes at Fairs next year! I don't care for the competition, I just like accomplishing the tasks! Bernie thinks Linus will excel at it because he is so curious about everything!
Donna & Linus having a blast in Ontario!