I got a quick ride in tonight after work.  The weather has been absolutely beautiful!  I wish it was this way all year round!  Seriously! 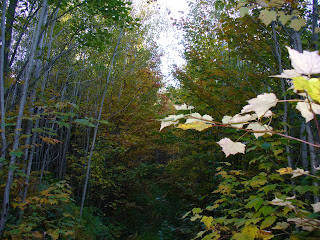 I decided to use my trails out back.  I haven't been on them since winter when the bugs and mud set in.  We've had lots of rain, so I expected a ton of water, but I was pleasantly surprised that most of it was dry!  Yay!  Corky was alert and I could tell was glad to be in his old stopping ground.  As we came to the clearing the sun was hitting just right and it was beautiful. 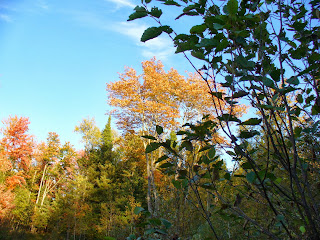 There is so much color everywhere! 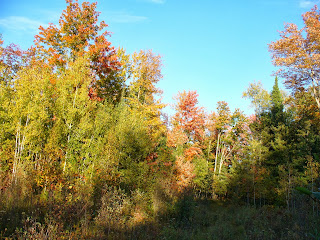 After I took these pictures we continued toward the back of the property.  I was remembering all my winter rides and was actually looking forward to all the riding coming up!  We went past the metal deer blind and then Corky started sidestepping looking to the left like something was going to bite him!  What is wrong?  REALLY? 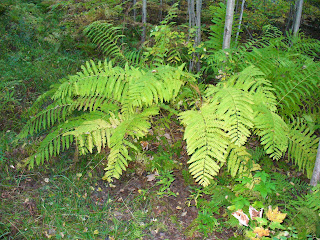 This LARGE fern just got him!  I have to admit it wasn't ordinary size at all.  Each frond must have been 4 feet long and it was waving in the wind, so I guess I could understand it, but with all the foliage in the woods that he goes by, who would have guessed!  I had to laugh at him!  We continued through the trails and even made some of our own!  Boy, was I having fun.

When we got back to the house I decided to go across the road to the neighbor's camp and see where their trail went to.  Before I did that though, I snapped this picture.  All week long I've been looking at the maple trees in their yard.  They've been this bright red and I know any day all the leaves are going to be gone. 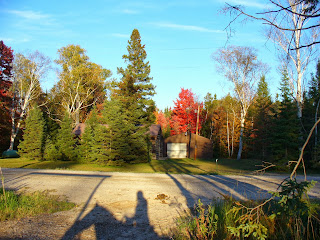 I just realized our shadow was taken too!  After taking their trail and coming back out, we headed down the road.  Ahhh, been awhile since you've been out alone, hasn't it, Cork!  Yes, he was stopping and thinking he needed to turn around.  I finally convinced him that my way was best.  We turned left at the next crossroad and I noticed two stray calves munching on the tall grass outside of the fence.  This time of year our neighborhood gets used to watching for calves crossing, even more so than deer.  The guy doesn't live there and his fence isn't hot, so the calves like the greener grass on the other side of the fence! 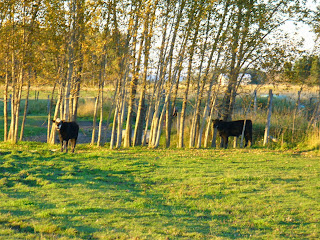 Seeing Corky and I, they made a beeline for inside the fence and then just watched us.  Corky is probably the first horse they've seen and weren't quite sure what to think.  There was a cow over to the far left mooing at us, but Corky paid no attention.  But he was very intent on the calves. 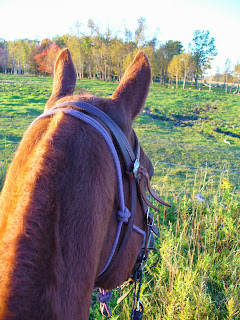 He probably stood still staring at the calves and the calves at him for a good 3 minutes before my other 2 horses hollered in the distance and it broke his concentration.  During this time I remembered one reason his former owner was selling him was she wanted a cow horse and while Corky wasn't scared of the cows, she said he didn't have the desire to chase cows.  But tonight made me wonder that maybe it was just the wrong person on his back.  Hmmmmm......

After my horses called Cork and he answered them, I realized the sun was going down quick and it was getting chilly and it was time to head for home, but not before one last picture. 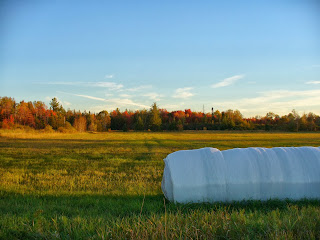 Happy weekend riding!  Janeen and Corky from the UP of Michigan
Posted by Unknown at 10:11 PM