Bernie and I were able to meet up this afternoon for a trial ride to make sure our boys were going to get along and also to make sure Allie wasn't going to uncontrollably freak out being left behind! Dad kept her busy while we were out and it could not have gone better I think! Linus and Lucas got along really well. They both have very similar laid back personalities. Bernie was very impressed with how Linus handled everything for being a young guy and that he did it all without a bit too! Way to impress, Linus! 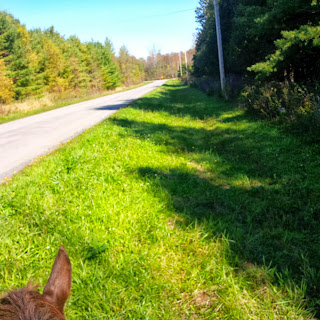 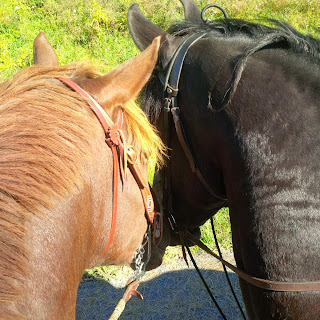 I was only able to get the one picture but the boys' got along like they were stable mates! I was so happy about this! Lucas is a bigger horse than Linus but not as tall as I remembered! More actually that Linus is taller than the last time they met 2 years ago - I wonder if they remember? Lucas has Friesian, Percheron and Arab (which only shows in those big ears!). He shows a lot of the Friesian traits.
We tried a couple of local trails but they were too wet. Very boggy! So, we did the trail that borders our farm and goes back to two hayfields. Lucas looked at our calves for quite some time (his cows at home are white!) and we scared up some turkeys but it was a very calm and smooth ride. Linus forgot all about Allie until she called for him. He answered back a few times and got a bit antsy but once he was reminded that I wasn't giving in, he settled and we went back to a loose rein. Bernie was laughing at how pokey he can be on the road but how zippy his walk gets on the trail! Tomorrow should go great for Linus because he loves trail so much!
So, it looks like this is really and truly happening!!! Cannot wait to post pics and tell you all about it!!
Donna & Linus
Lunenburg, ON