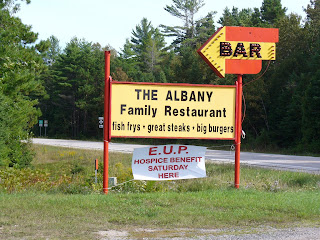 On Saturday there was a Hospice Benefit Ride down near Denise.  A mutual friend has a benefit ride every year about this time and this year she chose to support Hospice.  There were 33 riders, I'm told, after everybody signed up!  The weather was sunny and just the right temperature of 65 degrees.  At noon we were told "All aboard" and off we went!

I realized very quickly that Corky was on high alert!  This has happened before on the trail and I'm never sure what triggers it, but he seemed to notice everything in sight; big rocks, mud puddles, shadows, just everything.  After about 1/2 mile we needed to cross the road and the lines on the road were freshly painted white and yellow.  Everyone laughed as Corky literally danced sideways looking at the lines and me urging him to cross them.  This is the same horse that last weekend did the keyhole race and didn't think anything of the lines placed in the arena.  Go figure!  As we went farther down the trail we ran across quite a few mud puddles and he was avoiding them like the plague, so I was turning him around making him walk through them.  Well, as you can see from the video, he surprised me!

I don't know if you caught it, but I think our next endeavor will be sporting, like eventing!  Haha!  Corky's form looks good, but mine has much to be desired, but then again I wasn't expecting that!  And who would have guessed that Kathy would have been filming right at that second!  I swear sometimes she knows what the horses are going to do before they do!

As we continued down the trail the group came to a halt at a T in the road.  Where do we go?  Our fierceless leader Karen was at the back of the group and we needed to wait for her.  There was also a truck that came right at this time from the left and I'm sure they were quite surprised to see all these riders standing around in the woods.  Karen came and directed us to the right and we were on our way again! 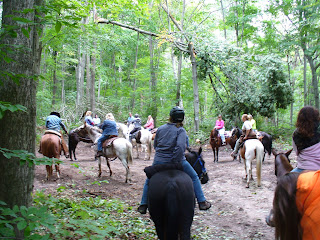 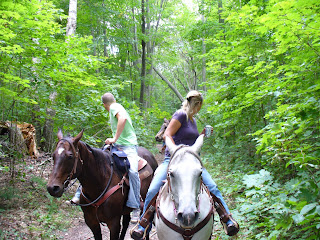 It was kind of cute as we were waiting for Karen to come direct us, everyone was taking pictures and I just put the camera over my shoulder and shot.  I didn't even know what I had taken until I got back home and discovered this.  Initially I wasn't going to share, but the couple that it is of thought it was cute that they both were turning around at the same time.  And really it was quite a coincidence. 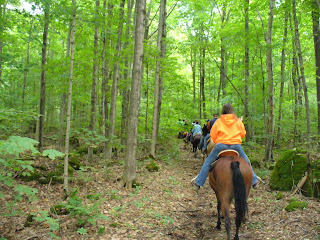 As we rode through the hardwoods to who knows where, I loved seeing this long line of riders enjoying the woods as much as I do.

Here's another video too!

We came out of the woods eventually, turned a corner and look!  It's Lake Huron! 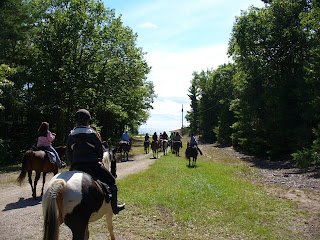 As many times as I've been down in this area, I had never taken this trail before and come out here, so I was a bit lost!  But whenever I see the lake, I'm always amazed.  Somehow we were in DeTour!  We crossed the road and what a sight as we came down onto the beach! 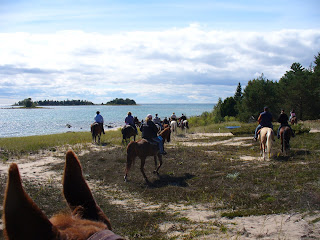 Corky is always as amazed as I am, as you can see from his ears turned to the left looking around.  By this time he had settled in and was my old Corky.  I kind of decided that he was geeked up because of the number of horses he was riding with  I never think about those things with him, I just throw him wherever I want us to be and then when I realize he's uptight, I wonder what's wrong and then realize it's a totally different situation for him. 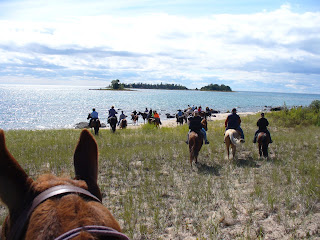 Love the islands out there.  There are alot of little islands here and there in this area of the peninsula.  Next stop was break time! 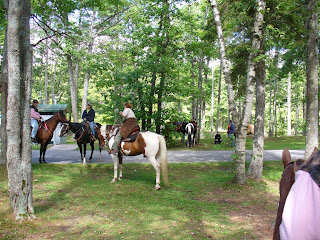 After breaktime we continued down the beach for a bit before heading back across the highway to go back to the Albany, or our starting point.  It was about another 2 hours before we got to eat!  I didn't discover until we were back that a rider about this time said she couldn't ride any farther and so help was called and her and her horse got a lift back.  I wondered where everybody was!  Yes, Corky even though he is short can have quite the pace to him, but it's not uncomfortable.  To me he's even more comfortable than a gaited horse. 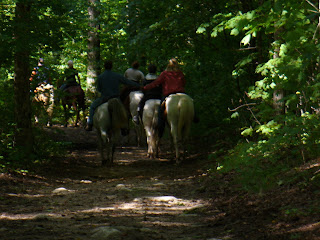 There were two couples that I kept seeing hold hands here and there and I was trying my darndest to get their pictures.  It touched my heart. 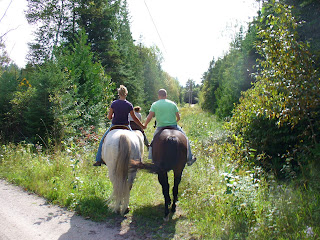 As we got back you could smell our meal cooking!  It was a pig roast!  We ate so good afterwards!

I had to take a picture!
So it was another excellent day in the EUP!  We should all e-mail Denise and have her share her photos!  She took quite a few too!  Janeen and Corky
Posted by Unknown at 9:18 PM