We've still been working and reading posts even though I haven't been posting myself! Towards the end of August, my Dad had a bit of a nasty fall from Allie when she spooked while he was mounting. It was a freak accident, he was winded but didn't think he was hurt. I was already on Linus at the time so we went after her and brought her back. By that time Dad was up and had the "get back on" mentality. So, he adjusted her saddle, got on and we went for a ride. Turns out he was hurt more than he thought. But it turned out to be a blessing in disguise as we discovered he has diabetes! (ssshhh, don't tell him - he is not one for "internet stories") So, I have been using his down time to work with Allie as well as Linus. She really wants more than anything to do the right thing but her past has left her questioning anything and everything. The first day I worked with her really had me appreciating Linus on a whole new level. And really showed me how much I do not think about certain things when I am on Linus. Anything could be a trigger for Allie where with Linus almost nothing is! 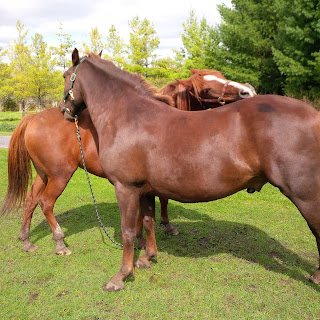 The above photo is from today, before our "training sessions". I think it was a support thing maybe?! Linus stretched right out - maybe he thinks he is a Morgan?? But, you can really see his Ben D'Or spot on his upper left flank. You can really see how much he darkens at this time of year too. 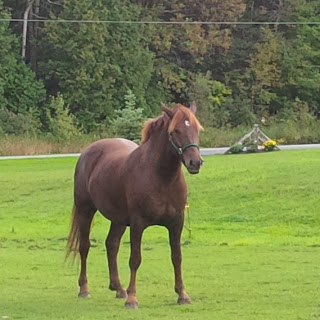 This above picture was also from today, poor Linus figured out the fence wasn't on and was leaning on it. A deer ran through it last week and he figured out it wasn't on so today I connected a wire from the cow pasture to it so he would get a shock and know that it was on. As you can see by his perturbed expression, he now knows it is on! Poor boy - but he needed a reminder. 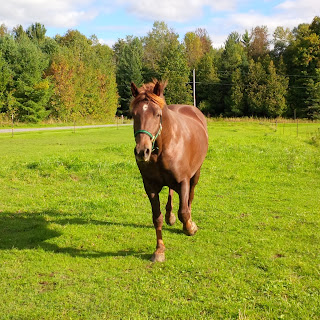 And, also from today - all is forgotten when it is time to come running for supper! 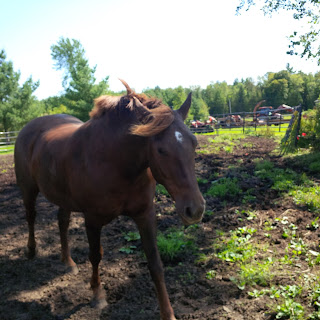 I took this picture from Allie's back. Linus wasn't quite sure what to make of seeing me on Allie. I don't think he was too happy about it but he didn't cause any problems. 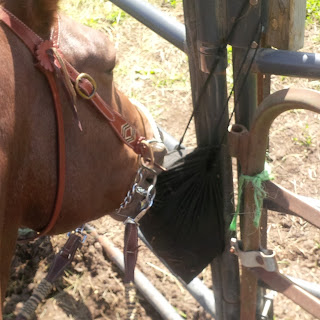 This picture may not look like much but it was one I had to stop and take. When I mount Linus he stands but usually starts to move off as soon as I am settled. This is fine with me so long as he stands for the mounting. Well on this day (earlier in the week) I had forgotten to put my helmet on. I got on Linus and he was standing firm. I asked him to move on and he took one step forward and grabbed my helmet bag. It was so out of character for him to not turn and go the other way. It really warmed my heart - was like he was telling me to put my helmet on or he wasn't going anywhere. He ended up picking the helmet off the fence and trying to turn with it but it fell. So I did get off of him and put it on! What a thoughtful man! 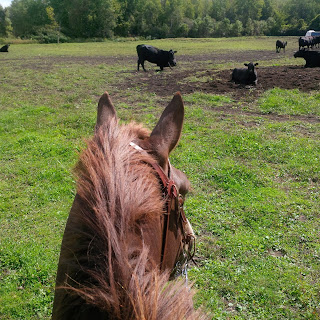 I thought of Susan and her comment about walking him by the snapping wire. When we rode that day, I decided to give him a change of pace and take him in with the cows. But, to get from the pasture we were in to the pasture the cows were in I had to dismount and open a double stranded section of fence (a high electric gate and a lower electric gate) and Linus had to walk by two live wires and a dead one that was laying there for when we close off pasture for winter. I just love this fella's trust in me! He watched the wires but calmly walked by them and stood waiting for me to hook them back up again. He even stood calm for me to remount even though he was excited about going to move cows! 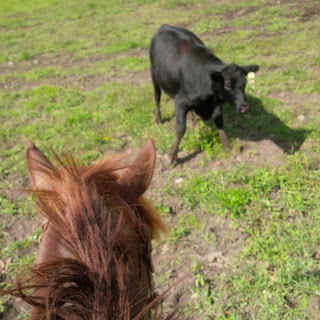 We focused on one in particular and cut her from the herd and then worked on keeping her cut. Linus just loves doing this! He is really good at it and I am sure a video of it would be hilarious because I am talking to him the entire time! It is nice to feel the level of confidence we do when we work with the cows. I never get them too worked up since we do have a pretty quiet herd and would like to keep it that way! But, when we are cutting a cow, I think nothing at all really about what Linus is doing. I know he will respond and he really does have the right instinct. He is good at reading the cows and good at moving with them. Maybe one day we can get to try something like team penning!