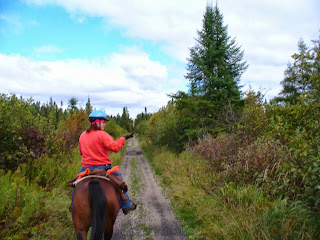 Sunday was the first day of fall!  Yay!  No bugs....or so we thought.  Sunday was a sunny day and temps increased over Saturday.  It was a beautiful day to be out!  I stayed to the north and picked up a friend who hasn't gotten to ride much this year because her horse had an abscess most of the summer.  Vet had finally given the okay, but only in sand.  There are alot of sand trails around, but Cat wanted to go to her old stomping grounds, which I haven't been to yet!  The person she used to ride with heran here passed away a few years ago and I realized at the end of the ride she had chosen me to start new memories on this trail with.  What an honor!  This trail is only a few miles north of me and I had no idea it was here or so beautiful.

We hadn't went very far when we came upon this and it took my breath away. 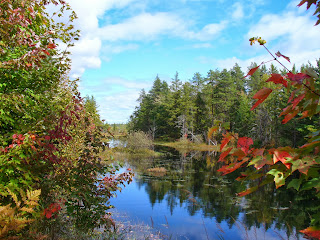 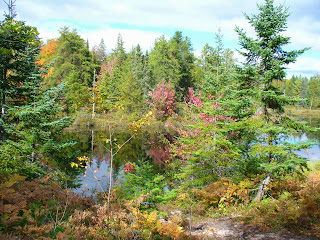 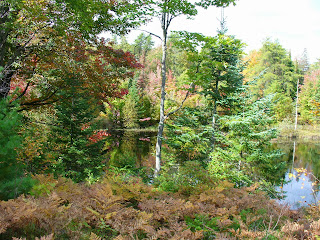 As you can see the colors have started to turn to the north.  We've also had oodles and oodles of rain this summer and she said she's never seen so much water here.


I found a nice colored tree to take her picture by!  She owns a beautiful Arabian cross that she trained herself from a baby and her name is Calamitty.  Calamitty is not marish that I've ever seen.  Cat is the friend in the previous post who told me I need to do the trail challenges with Corky.  She really likes Corky.  She's also the vet tech for the vet who tried to help Rocky.  So our friendship has grown by chance, much like alot of my horse friends!  But I digress!  Here's Cat's and Calamitty's picture! 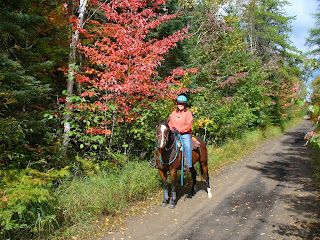 As we progressed down the trail we came to an open area where the pipeline runs through and boy, talk about sand!  I felt like I was at the beach!  But the beauty to the left was gorgeous!  I believe the hills you see in the distance are the hills north of Sault Ste. Marie, Ontario in Echo Bay! 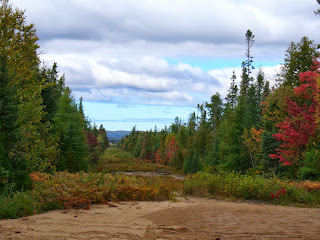 At this point, Cat took me around a gate and we started down a single track trail.  After a bit we came to sign like what is at ski trails for their maps!  It suddenly dawned on me that we were on the back side of the Algonquin Ski Trail.  My mouth fell open and I said, "Cat, this ski trail is 8 miles long!"  I couldn't believe the gold mine I had just found.  I didn't know I could hit that ski trail from the back side and have thought about riding it, but it's inside the city limits of Sault Ste. Marie and unloading a horse is dangerous to me because the parking lot isn't open in the warm months.  Hot dog!  Boy, do we trails now!  We continued down them for a bit.  Cat's sense of direction isn't good, so she was glad I could read the map. 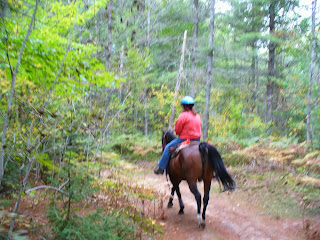 At one point I was perplexed as to which way to go, so she got out her compass and said, "We're headed north......no, we're headed south......no, we're headed east.  I don't think my compass is working right!"  I had to laugh.  I said, "We'll go this way and if it doesn't work out, we'll follow the horse tracks backwards!  That always works!"  There were soft hills like ski trails have and bends and curves.  I'm sooooo excited! 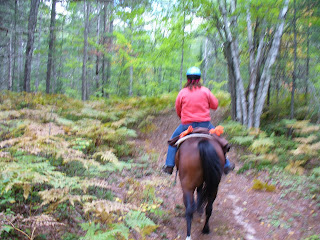 Then we went around another gate and we were back on the two track that we started on and we headed for the truck.  To our amazement we had been out for 2 hours and didn't even realize it!  Calamitty was so enjoying this ride too!  She didn't show any lameness, so Cat was pretty happy too! 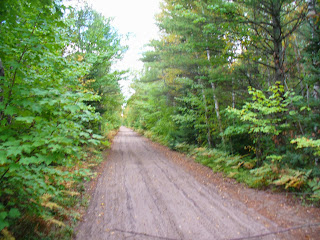 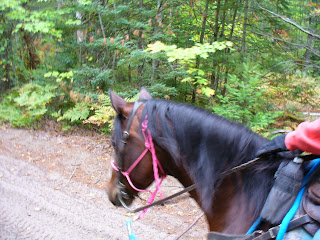 Wishing you all wonderful fall rides!   Janeen and Corky from the UP of Michigan
Posted by Unknown at 10:20 PM