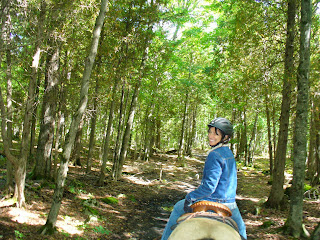 Saturday, (Yes, I know I'm way behind!) I was supposed to go to a trail challenge that was local here.  A friend had called me after the one last month and said "You and Corky have to do this!"  It sounded like fun, so I was all set to go!  Then Friday night about 9:00, (last minute of course) I start looking at the obstacles that could be there on the 4 mile trail and got real nervous!  Some of the things that it said you could be judged on, I don't even know how to make a horse do, like side pass, much less Corky knows how to do.  Then Saturday morning it's like cold and misting and real fall-ish, not summer like at all.  So I chickened out on the trail challenge and headed to Denise's.  We decided to ride "The 80."  It's mostly hardwoods and we were hoping for some color.

Somewhere along the way Denise suggested we make this a Corky trail challenge ride, just to show what he does know.  There has been a few storms with high winds of late and there was new challenges just getting around some of the downed trees.  This particular "obstacle" was the perfect Mother Nature made challenge! 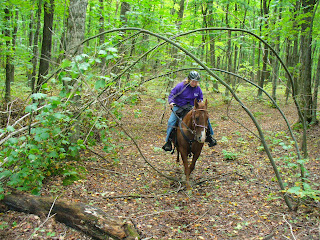 How perfect is that?  A bunch of saplings being bent over in an arch and held down by a bigger tree!  Corky thought nothing of it.  We putzed along some more and found a mud puddle that was soupy.  This week he didn't try to jump it!  Yay! 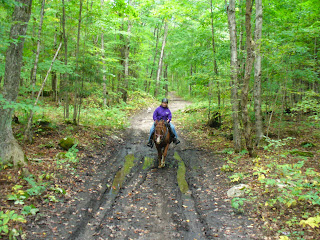 As we rode along the trails the beauty was endless, but there wasn't much color yet in this area of the UP. 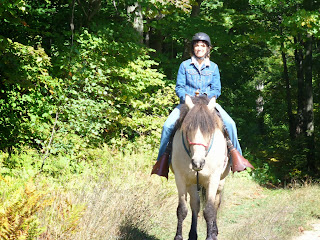 Denise and her lovely Bear!  Such a good boy!  Bear had his own challenge this day.  I have NEVER seen Bear spook, but something crossed our path and all Denise saw was a dark shadow.  Maybe it was BIG FOOT, Harold!  We don't know.  But Bear did a 180 and was going to run right over Corky!  Corky startled but didn't see what Bear and Denise did, so he wasn't even sure why he was thinking of running.  Our fearless dog, Ruby, didn't see it either and was wondering what the heck was going on!

Ruby has become an honorary member of my family.  :)  So I had to have my picture taken with her!  We need a Ruby blog!  See Ruby on the right sign of the picture!  She kind of blends in with the sand. 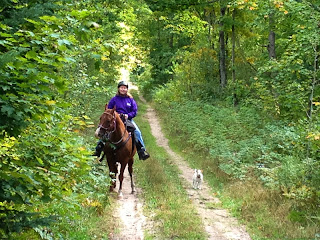 And I did find some lovely color! 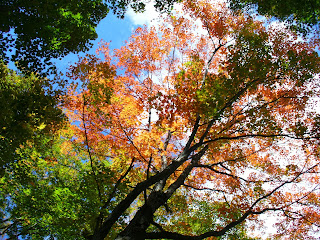 We found some four-wheelers too!  They were very polite and shut their machines off as we passed.  Now I'm sure Corky has seen a four-wheeler before and not think anything of them when they're running, but he swears they're going to bite him or chase him if they're turned off! 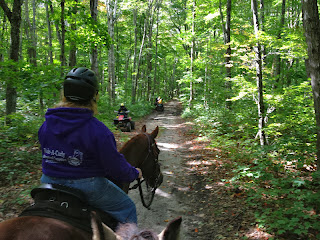 We found a sapling that had to be lifted over our heads in order to continue down the trail, which Corky handled with ease!  This also provides the perfect arm exercise! 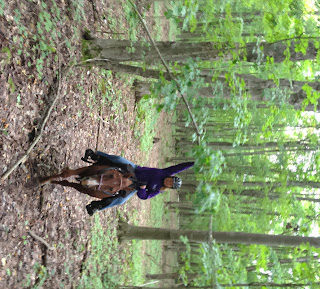 Sorry, this is sideways!  I don't know why it did that and I can't figure out how to fix it!  Humf!

Then we found a bunch of downed logs and one was very big and Denise was kind enough to video Corky going over that!  Another obstacles all day was the wind!  It was very windy at times, but both horses were very good about it!


So what started out as a yucky day turned out to be a wonderful day! 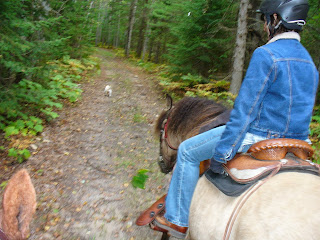 And Bear decided he had better take a branch with him to store up extra energy in case Big Foot showed up again!  And I have to share this picture that Denise snapped after our ride was over.  She caught Corky in the perfect position! 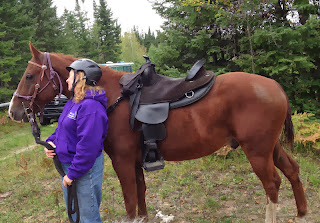 Wait until you see where Denise and I and Laura and hopefully some other friends are heading this Saturday!  You'll love it!  Stay tuned!

Janeen and Corky!
Posted by Unknown at 9:49 PM