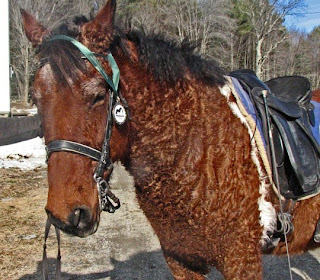 A somewhat goofy portrait of my precious mare showing off my RAC incentive medal - 750 hours in the saddle.. mostly logged with Keri. These hours logged in 2009 were some of the most challenging and perhaps most meaningful of my riding career - so I am quite proud of those 750 hours :) To keep a long story very short -- (and that is not my most developed attribute since I tend to make short stories long) .. it started in 2008 .. first a kind of scritchy feeling in my hip and leg, followed by one morning being barely able to get out of bed and forget putting on my socks. Yikes... needless to say I did not end 2008 on a great note riding wise... and was terribly cranky about it. Lots of physical therapy along with a new saddle (my treeless) and the hope to be able to log something in the saddle, I started out 2009.. (my poor patient kind horse) very lop sided, very weak on one side, and still stiff and in pain. For awhile I even had one stirrup leather longer than the other - as my one hip/leg was so .. well, not capable and useless I guess. Not so great for the horse, I know -- but she was my best friend and supporter through this and totally forgiving. If I could trace the 'injury' back to one event - it might have been the time I was forcibly catapulted out of a run away cart and landed on my side onto a cavaletti. At the time, I got over that pretty fast (other than not being able to wear my regular clothes due to swelling that was comically humongous). Over time my body just said - enough.. there was nerve damage and skeletal stuff needing attention.

Not to whine too much - but I could not even drive my car (the clutch was impossible) and I do think everyone could not figure out how I could be so nearly cripple yet continue to ride. I happen to be the type of person who works harder when in pain.. but once I stop moving.. reality sets in and I was getting pretty discouraged. Riding was the best thing for me - physically yes.. but spiritually.. to get me out and proving that flying was still possible. :) My lovely mare was very sensitive and accommodating during those days and months of recovery.. at times she did travel a bit to the left.. trying to get under me and support me on my weaker side. I had a lot to work on as I healed.. myself - to become more balanced and strong .. and help Keri recover her balance as well from carrying me all that time as a 'cripple' :) I also had Zoe as my cheerleader and encouraging soul.. and slowly and surely.. I gained my strength back. I did lots of work to get the balance - lots of trotting on the left diagonal .. for Keri and me. My cantering seat was floppy and yikes.. so embarrassing... So many constant verbal cues to myself.. and trot trot trot..
The BIG day came .. when one day, back in August, we were out for a trail ride and ended up at one of my favorite places - the "pink house' .. which for some reason Keri has never cared for. She gets anxious there - but I like it so continue to ride there on occasion. Somedays, no matter how much I love her - she has to suck it up and do it anyway. As we were about to enter the trail for home... Keri all of a sudden picked up the bit and began to gallop for home-- she'd had enough I guess.. it was not a spook, just a let's get outta here statement. The trail was far too narrow and rough for a 'pull the horse around in a circle' stop - she would have definitely gone down. The branches on either side were whipping my face, we were jumping logs and rocks.. plus it's all downhill... here's where we have to make those millisecond decisions :) As I am totally cursing my RUDE mare... I am also overcome with crazy delight.. A little over a year later after I woke up not being able to put on my socks or get up out a chair.. I am riding a run away gallop through the woods...
I remembered reading -- first thing to think about when a horse runs away—always—is riding, not stopping. You need to have a mental picture of riding, of moving, with the horse. You need to control your mind and focus on problem-solving thoughts rather than allowing panic-driven thoughts to run away with your mind. I relaxed as much as I could- focused on maintaining my upper body upright, so as not to risk going off over the horse’s shoulder with a sharp turn or over her neck if she drops her head. I (all the while silently cursing) became in rhythm with the horse, I actually asked for the movement to allow the stride. I got back in time with Keri and got her attention back on me -- HELLOOO - her rider. So here's the thing.. while what she did was beyond rude, I was SO thrilled that I had become.. without even realizing .. a great rider again !! WOW... and I could wax on - but basically.. I promised a short story :) I love my horse- and I love this moment of truth in the woods, and the RAC has certainly been a big part of my healing by helping me set goals. I surely hope that all of you can experience those moments - small or large.. and make another step forward too. Part of those 750 hours were hard work.. but mostly they were a joyous journey .. 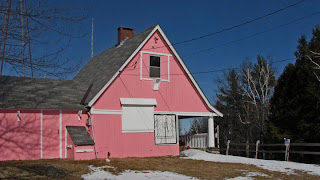 And by the way -- we still do trot up to that pink house ... I try not to have negative expectations that my mare will be rude... This past week- we ended up there, in a round about way as we found a new trail which headed in that direction.. Because of the ice everywhere, we have been riding some loops which include the highway -- and crossing over to the other side of the mountain. It seems warmer over there and less ice on the backroads. 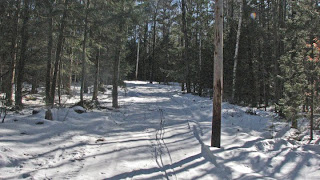 The snowmobile club cut a new trail through the woods which for some reason we have not seen until this day. No snowmobile tracks-- but someone on a mountain bike has ridden through. 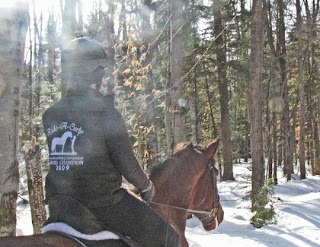 Warm sun (but super cold wind) .. the shadows are longer, spring is closer -- and it's almost time for sugaring. 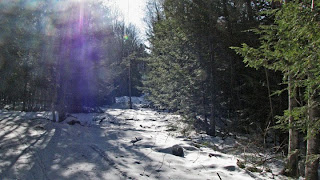 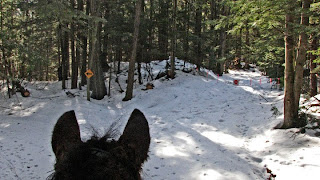 trail choice.. a rope across does not stop us from investigating. 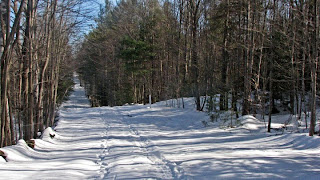 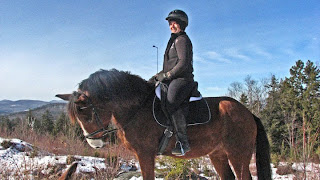 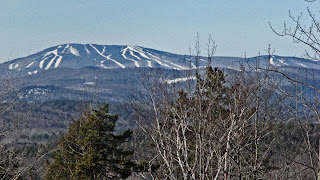 Views from the front lawn of the pink house - That's Okemo skiing area. 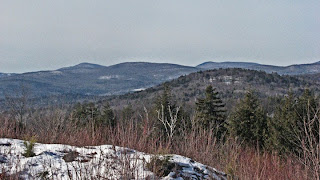 Now right here - at this drop off.. I firmly say to my Keri - I would not take so kindly to a run away so don't even think about it. 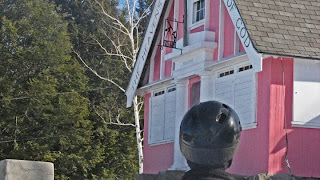 One more photo of my favorite little house. 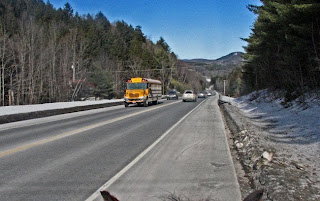 trot and canter home on the highway. 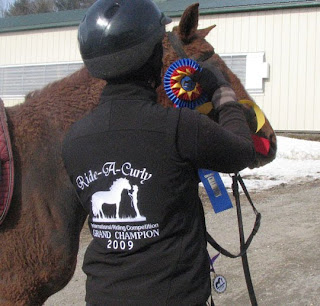 And lastly - let's not forget our Teasel - Mister "T" - the stealth man... who was a big part in Zoe's RAC logging hours. :) If there was a contest for homely - the "T" man would win hands down (sorry "T" you know I love you anyway) -- but he has a huge heart and is an awesome horse :) He's always up for an adventure.. no matter how challenging. 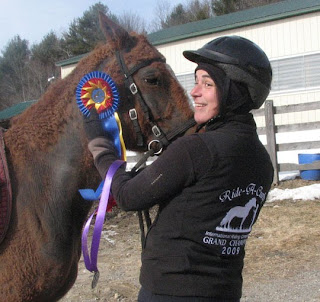 2009 was a great RAC year - and I am enthusiastically looking forward to another super year-- for all of you out there in RAC world too !