We lived through the end of the world.
The end.
Just kidding, but after all the hype over the end of the Mayan calendar I was beginning to reminisce over the y2k panic and the potential ruin of civilization as we tech-dependent knew it. There is nothing more rewarding as starting a new year participating in the Ride-A-Curly Competition after what seemed like a never-ending holiday season! A great way to work off those extra pounds I've put on, at some point I just looked at family dinners with the thought, "oh well! I'm already in for ten might as well make it fifteen before the new year.."
Getting the flu helped too. :)
First a big thanks to Denise for not only having the brilliant idea and putting in all the hard work and time in to make RAC what it is today, but for resuming it after a well deserved break last year. :)
For those who don't yet know me, my name is Erica and I live in southern Wisconsin. I just recently got married so am still in the process of changing over from my maiden name Frei to Franz. Thankfully not a big shift. I get to look out my home-office window to see my two Curlies, Jobi & Aligarh who I am participating in RAC with this year, as well as a newly acquired coming 2-year-old Paint gelding (Corbell) and my cousins' horse Phoenix (a most wonderful kind of grade mix).
Goals, I suppose I should outline some of what I'm aiming to achieve with my boys this year. Let's start with Aligarh, who was recently started last summer under saddle. His training really developed very easily and naturally, he's a naturally curious type who loves to be worked with. He is half Dutch Warmblood too though so that sensitivity cannot be denied. We worked a lot on some anxiety issues over the last year and this one will be continuing to develop his education and fitness. I'd love to get him out on some trails but will be taking everything at his speed of comfort. He's been ridden in a bit only once, otherwise everything I've done with him has been in a halter only. I'm still on the fence about bringing him along in a bit vs. leaping straight to a bitless bridle with him and am open to any input from fellow RAC'ers who ride bitless. 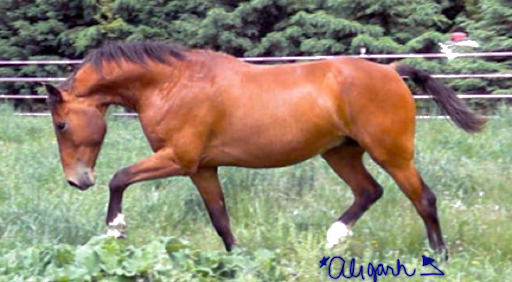 Then there is my beloved Jobi. He has made leaps and bounds of progress since he came home a year and a half ago. At that time not only was he reactive, distant, stiff/tense/resistant, imbalanced and distrustful; he was also dealing with some low-level lameness from a combination of poor trimming, really poor shoeing and a severe thrush infection. His body musculature was also surprising to me as his back muscles were mostly atrophied despite being worked regularly under saddle. We had no canter departure, he felt he needed to run through the bridle once in the canter, trot was a mess and walk was tense and pacey. A lot of bit anxiety to start as well.
Coming into this year however, he is much more interactive though he still seems a little off to me - not as alive in spirit that he once was. He takes the bit willingly. Working on giving to poll pressure again but he no longer pulls back on pressure. Body musculature is very good, no lameness, some residual fungal infection that is being treated but waiting on the hoof to grow healthier still. Our last ride he gave me some very nice canter departures (relaxed and balanced) and also came to a halt from the seat alone with loose reins. Wonderful four-beat walk, etc.
Okay, back on point.
I want to continue rebuilding trust and interest on the part of Jobi. Make "work" more of fun and play for him. I'd really like to get back to doing more long-distance trail rides which he always used to enjoy a great deal. I'm also looking into taking some lessons again in jumping for both Jobi & Aligarh (what Aligarh is bred to do actually). I'm worried considerably less about getting advanced movements out of him right now and more about giving him what he needs to be wholly comfortable communicating and working under a rider again. (And thinking about switching him to a bitless bridle since he has so much fear about the bit) 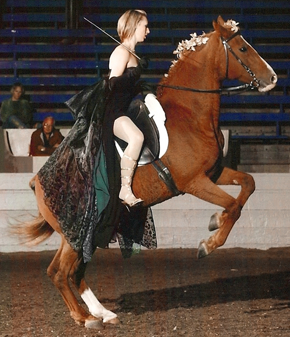 And sure to be helping out this year will be my troupe of puppies, from left to right; Honey (Pit/Lab mix), Pablo Escobar aka The Boss (Chinese Crested hairless), and Petrie the Powderpuff (Chinese Crested powderpuff). 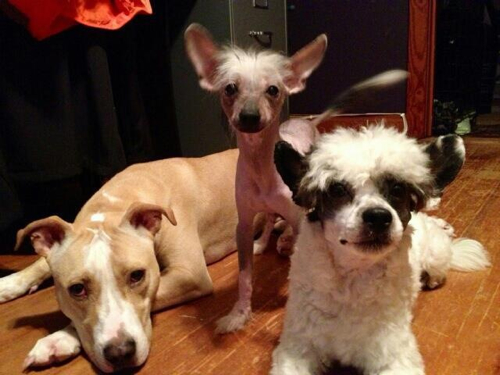 Oh yeah...
Me & The Hubby (Jason), who I may have to recruit for photographer this year. :) 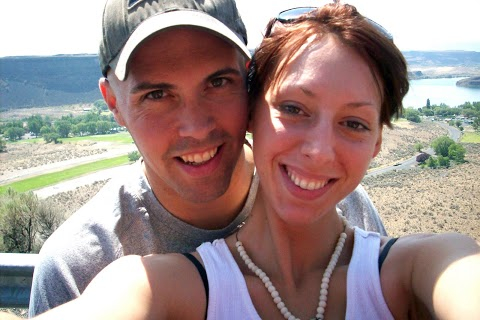