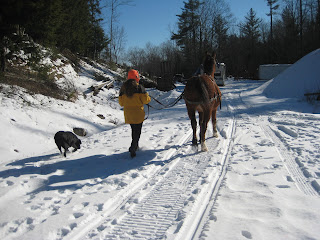 Once in a while, I get all fired up again about putting Ah-D to a cart, and this time it happened to hit me right smack dab in the middle of January.  This looks fairly simple, but getting my Curly to understand that he is supposed to be out in front of me has been quite the undertaking.  He had an epiphany on Sunday. 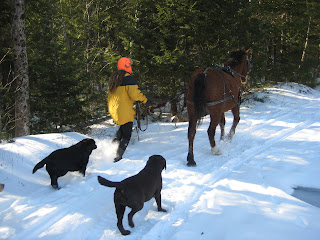 He looks nice and relaxed in this photo, the way I would like him to be, with a nice forward cadence to his walk.  You can see that I am working hard to keep up with him.  I ground drove our Haflinger first, thinking that Allie is a slowpoke, so it wouldn't be too much of a big deal, but if you imagine walking as fast as you can through fairly deep snow (or a sandy beach far up from the water line), that is what it was like.  I was reasonably tuckered by the time I had done the trail loop with Allie, and so by the time I worked Ah-D, well lets just say I didn't practice "whoa" and "stand" just for his benefit. 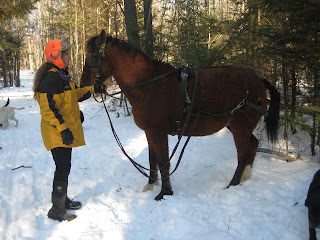 Here I am gasping for breath.  Most of the time I had to hold him at the stand, because he was quite excited and did not want to stand still, but a couple of times he nailed it.  We have made huge progress with the ground driving, but we still have a ways to go, for sure.  I realized when I was doing this that I really want to be driving from Ah-D's left (because I am right handed??), so several times I switched over to the other side.  Same with the "stands," a couple of times on the gee-rounds (circle to the right) and haw-rounds (circle to the left) Ah-D sailed smoothly on through it, and sometimes he was confused.  Once when he was confused it was driver's error; I called a haw-round a gee-round - ooops. When he (or I!!) get confused, we stop, calm down, and do a "do-over."  The only time I let him trot was when we were back out on the road.  By the time I have him in a cart, I am hoping to build some muscle and up-my metabolism a bit.  That, Ladies and Gents, is what is known as a win-win situation.  Harold, I had no time to look for Bigfoot on this outing because I was too busy concentrating on my pony, but I promise to try to be more aware next time we give it a go.

Posted by Susan Lejonhud at 1:10 PM