Hats, a dog and a warm day!

Today was even warmer than yesterday here in the UP and I couldn't resist taking a short ride at least, especially since it's supposed to rain/freezing rain tomorrow!  Boo hiss!  I decided to make this ride a little more challenging for Corky and take our dog Chance along.  Chance picked up on a trail, as you can see, and I'm thinking it was Big Foot!   You can see all the old footprints from last night before it snowed this morning and covered them up.  Eventually Chance got a little intimadated and decided to use Corky as her shield against Big Foot, so she followed Corky.  Corky was really good with all of this and I think he was a little calmer because we had company on the trail.

About at the quarter mile mark (as I call it), I found this hanging on a tree! 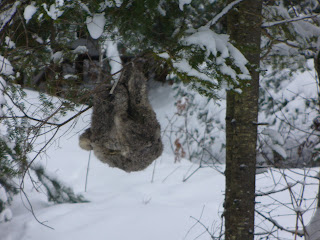 What in the world is that?  I asked Corky to go over to it and he ran right into it and backed up real quick, like it bit him!  It's a rabbit hat!  No wonder Corky was startled!  It didn't feel like a tree branch at all.  I can't figure out how that got there!  Corky went back up to it and I took it off the tree branch to take back home to show my husband.

We continued around the trails with Chance following us, all the time I'm wondering where that hat came from!  I'm sure Chance at this point was wondering what she had gotten herself into.  She has always wanted to come on the horse rides, but it was hard work keeping up with Corky, even at a walk.

Just as we were coming around the next to last bend in the trail going home, all of a sudden Corky stopped dead in his tracks, looking at this strange track going across the trail.  He started breathing deep, which made me wonder what he was smelling!  The track was too small to be a bear or coyote or wolf.  I urged him on, but he was hesitating, but continued on slowly like a good boy.  He kept taking deep breaths, which concerned me, but I couldn't see anything.  Something definitely had passed in the area recently that concerned him, but Chance wasn't picking anything up.  Just as we turn the final bend, I find this! 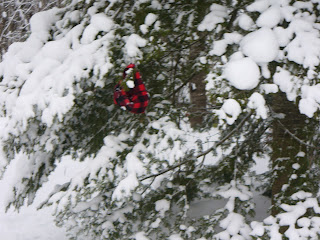 Another hat in a tree!  What the heck?  I ask Corky to go up to it so I can get a better look and take it off to show my husband!  Where are all these hats coming from?  I'm hoping I can go out on Wednesday and continue to investigate, but there are some strange things going on in my neck of the woods.