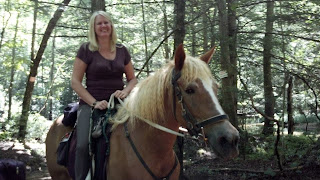 I would like to share how a beautiful, flaxen sorrel Curly horse named Shya stole my heart.  I have the most amazing QH palomino gelding named Jake.  For many years he was my horse soul-mate.  We rode miles and miles together and had lots of fun.  Then came the tragic day when I was thrown off a horse I had rescued and my back was ruined.  I continued to ride Jake but had multiple falls because my body was so weak, which resulted in the rest of the damage to my spine and hip (none were his fault, twice a turkey flew up in front of him, one time I was bare-back and he did a 180 and the other I was reaching for something and Jake did a 180 in the opposite direction).  I could no longer ride Jake because he was too rough for me so we went on the search for a smooth riding Curly.  We had always said if we got another Curly we would get another one from the Ellis family.  So once again, Carrie sent me pictures of what they had available, and I, like my husband, fell immediately in love with one of them, DE Shya.  We made the trip down to TN, picked her up and brought her home.  Little did Shya know, but she had big hooves to fill, and I wasn't going to make it easy on her because Jake was "IT" for me.  We started her out doing CMO"s with her sister, Pickles.  She was soooo smooth and I would brag to everyone else about it.  But she had a hard head and would fight me all the way, tossing her head  and acting like a spoiled teenager.  There was no time to work with her because we were competing each time we rode and it was a timed event.  I would get all grumpy because "she wasn't Jake".  I would see him in the pasture and would be in tears because I wanted to ride him, not her. I was used to a push button horse who was super sensitive to cues and she was not that way.  I admit I was a big part of the problem.  I needed to let Jake go.  She and I rode many times together but we just didn't click.  She is very intelligent and would do naughty things like rub her halter bridle off when tied to a tree, or rub her saddle against that same tree.  She would stop when I walked up but the second I walked away she would start again so I had to babysit her the whole time.  While everyone else was enjoying their lunch, I had to stand next to her and eat.  I finally started taking her halter bridle off and tying her to a tree with a neck collar and I would also have to take her saddle off.  She was grumpy on the trail and could not be ridden next to other horses.  When picketing, she would be on one line and the other horses would share the other picket line.  I was so embarrassed.  I didn't like her and she didn't like me.  We continued to ride with a couple we met down here in TN and they allowed me to work with Shya.  She learned how to ride next to other horses and was much less grumpy on the trail.  I started wearing spurs and starting guiding her to do as I asked.  I worked with her on neck reining instead of plow reining.  Little did I know it but she was slowly working her way into my heart. Whenever we would canter she would drop her head and threaten to buck, which scared me because of being thrown off all those years ago, so I would choke up on the reins.  One day as we got ready to canter,  I just dropped the reins and quite literally said to her "Shya, I am giving you control and I am going to trust you, please don't let me down" and she flew like the wind and did not threaten to buck. I had tears of joy in my eyes the entire time. I discovered that my choking back on the reins was causing her to toss her head!  That day paved the way for us to completely trust each other.  We now do the ground eating canter which turns into her turbo canter.  What a joy! We enjoy each others company and she just gets better each and every time we ride. I still have Jake, he is 30 years old and is retired.  I see them out in the field together and I remember my days with him, but when it is time to ride, Shya is the one I choose.  My new soul mate!  And now when she rubs her halter bridle off, I just laugh!
Posted by Unknown at 8:35 PM