Hello from the Lone Star State, 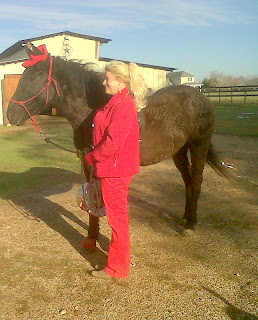 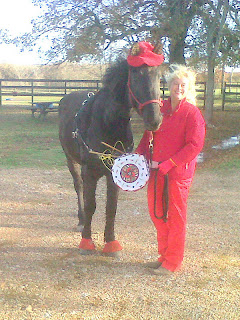 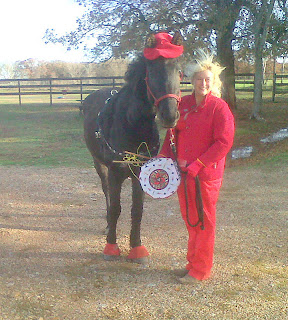 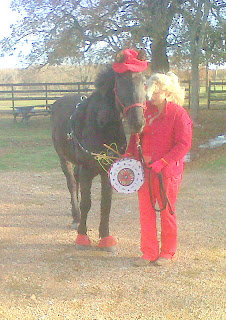 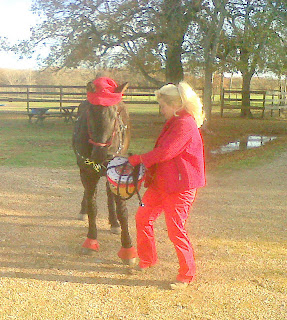 Our H Creek Colonel Travis, affectionately known as Jett, as in Jett Black, and I are working together everyday and learning more and more about each other. So it seemed perfect to tie in our December challenge with a little desensitizing training. After a good brushing, man are solid black horses hard to keep clean - but worth it - we tried on our red bell boots. Red shin boots were next but Jett was not sure how to walk around with them, sorta like me the first time I tried on my mother's high heels so we dropped that idea.

Next, we put gold ribbons in his tail, yes, he said that was different but stood quietly with those curly black ear with beautiful beige curls flowing freeing while listening to every sound I made. Then, we adjusted the surcingle to try and hold up our drum (a plastic potted plant container sprayed gold) but it wouldn't work so we added a breast collar. Wow, Jett said, this is really different but so far I am OK with it and I liked the Texas stars addition to our outfit. Then the drum and sticks. Really? Those big black eyes would look down and then look over at me and I suddenly realized what faith he had in allowing me to do this as he couldn't see the drum and sticks and it must have felt so unnatural to not be able to see it, but know something strange was there.

So we walked a bit and he relaxed and allowed me to to continue this game. The final addition for our Christmas theme was my red beret. I thought no worries, it's just a felt cap and doesn't make any sounds but we sure had to work out the ears situation and convincing him I wasn't going to cut his ears off as I make holes for them to poke out of was a real challenge. He was sure what I was setting him up for weird....a teenager at heart, I guess he was afraid, I was trying to make him look silly.
My hubby who tries hard to be a good sport starting taking photos and well a few turned out OK but mostly we learned a lot and Jett will always be my Golden Drummer Boy.