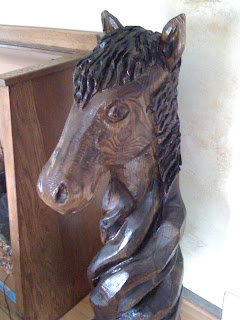 Brigi and I have been on many adventures lately. I've just been bad about getting on the site to blog. Before I get going on all we've been up to, I have to tell you all about my ultimate Curly advertising birthday gift. My husband Tom had a chainsaw artist(I think that's what you'd call him) create a bust of my curly Brigi. I added a photo. It's in my dining room right now, but will be out to greet people when we are at the new farm.
Anyway, we have been checking out the new to us trails near our land with my neighbor there. It's awesome to go out for at least 2 hrs and cross a road twice at most and the trails are fairly wide and we live on drumlins so there is lots of ups and downs. We took the dog with us last Wednesday, which was a new experience for her. Great too because the dog spooks up the deer ahead of us and is loud enough to keep the horses attention, so they aren't spooking as much. Not that she does spook much, she's a thinker.
Two weekends ago, we road for the first time in a local park with some friends. We encountered lots of dogs (on leashes thank goodness), people hiking, bikes on the roads but we were mostly off the roads. I was very proud of how she takes in all I seem to throw at her. She is content to go at her own pace. She has improved greatly on allowing horses into her space without being over "marish," but there is still plenty of room for improvement.
A couple of days before that, I wanted to ride her near the barn where I keep her, but she hadn't been out in a while on her own and I had to ride along the roads so I decided to make a lesson out of it. Tom was not too busy that day so he rode his bike and we rode next to him. I had him come from behind and get out in front of us. I think she kind of thought it was cool, because a couple of times she wanted to trot to catch up. Drivers near the barn for some reason are extremely rude, no one slows down, moves over, etc. We had a school bus fly by at us at the speed limit, and everyone is need of a muffler when I get out there, I swear. It's been awhile since I owned my last horse, but imbetween did people really get that rude and/or stupid?
Well I'm trying to get out as much as I can this week before gun season starts and then I'm stuck in the field in front of the pasture or trailering to the park. Hopefully I can go for a bit tomorrow.
Posted by Jill at 9:05 PM