AhD was pretty darn spunky for this Sunday ride. He hasn’t been getting anywhere near the exercise that he did pre-hunting-season, and it showed. My friends arrived just after noon, and we headed down across my neighbor’s property to the trails that led to Sanitorium Hill. We spunked along down the trail that leads to the Sandpit Road. One of us was tossing his head and kicking out at dogs at every opportunity. The lovely Dane Ebony joined us as well as my beautious Lab Grace. The dogs were in seventh heaven, right along with the rest of us. We crossed three really expanded streams; it didn’t seem like crossing, it was more like walking down small rivers. Grace swam. After traveling through the sandpit and walking through the last stream, suddenly AhD dropped his head about six inches and settled into the ride. Whew! 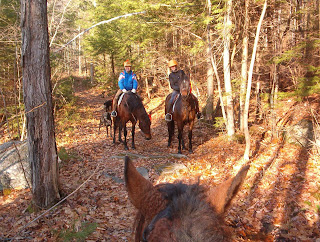 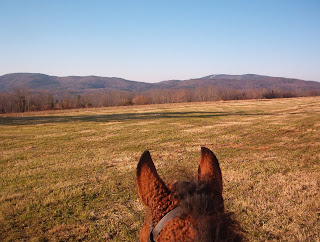 at the top of Sanitorium Hill. 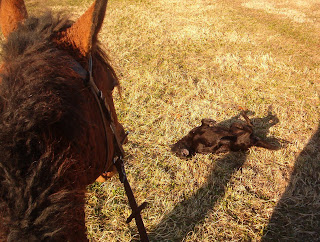 Grace was ecstatic. After a short break, my friends decided a canter was in order, which was fine. We cantered a while and then my pony started developing an Attitude again. I dismounted and we did some circles and other groundwork. I made him stand still, out of sight of the other horses while I picked the burrs out of his curly coat. Once I was sure his mind was more on ME rather than on the other horses, I mounted and we worked on some larger circles, whoas, backs, and we also practiced heading away from the crowd. We spent quite a lot of time in the field, and then found a trail at one end of it. Took that trail aways and then back out on the road. 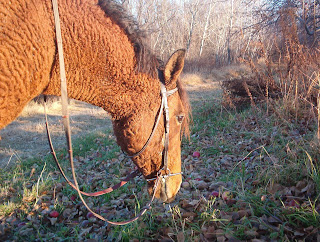 We stopped at the edge of an apple orchard for a treat. 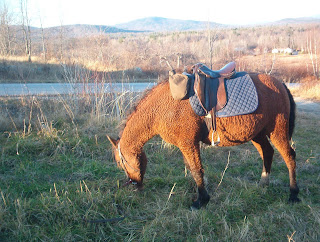 Headed for home, we trotted briskly a mile or two along a back road before we took another woodsy trail. It was a good workout for me and AhD. Grace was exhausted! She is not in shape like Ebony is. At the power line, we decided to try that a bit, since my friend Ulla had never experienced power line riding. I said, "Follow me!" and off we went, picking our way through the terrain, charging up steep hills, and coming much more gently down the other side. AhD was being a good leader. We crossed yet another overfull stream, and then left the power line for my neighbor’s beautiful trails. Ahhh, a perfect place for a rollicking canter! AhD envisioned himself as a racehorse, but I reminded him that he was a Curly. He listened, so I let him gallop up our Running Hill. By the time we got back to the house, Grace’s tongue was about hanging on the ground, but boy, was she ever happy! ME TOO!
Posted by Susan Lejonhud at 4:17 PM