Our new little Queen of the Hill 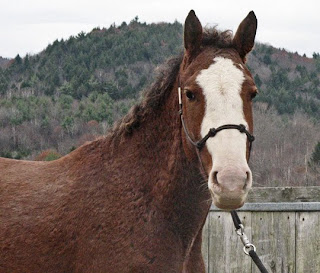 OYY Queen Jane Approximately .. named after a Bob Dylan song.. but I am thinking in retrospect - perhaps one should never include the word QUEEN in a name for a horse.. or they might get lofty ideas.

But- I suppose this girl deserves to feel special, since she most definitely is. Her full brother is OYY The Mighty Quinn who is in MA winning ribbons left and right for his young rider. And before he was gelded - he sired our also winning young girl OYY Elektra - So the cards are stacked in Queen's favor.. she's already much more beautiful than her brother- and taller too.

Queen will turn 3 in the spring - so it's time for her to have some refresher courses in respect and following direction. If there is any one trait that seems to be passed on in the "Lilly" family it's the little habit to anticipate what will be asked and perform before the asking.... sometimes the horse is wrong in their guess.. sometimes they are correct - but still, they must wait for the cue and THEN.. respond. :)

Queen had the usual flinging rope toss exercise.. and the whirling rope around and over her head. She needs to stay more focused on her handler.. you can see she likes to look around. I think she'd make a star neighborhood gossip. 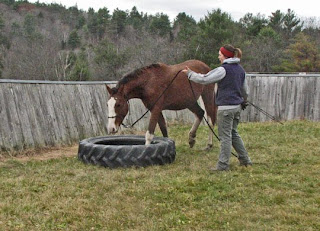 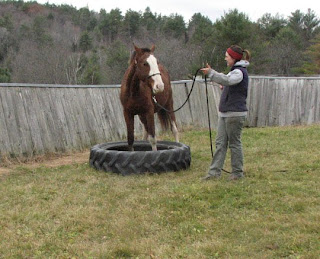 The tire was a no-brainer for Queen.. As she glances over at Zoe as if to say .. OK, now what ? 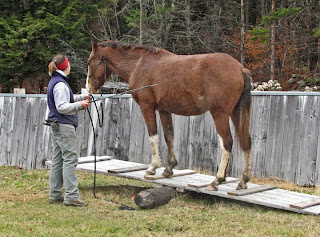 Over to the teeter-totter to see if we can challenge her more. She had some trouble approaching it from the right, not one misstep or hesitation from the left. That could be her, or it could be some subtle differences in the handler's cues.

She's a smart young girl with a fabulous future. Zoe is really looking forward to riding her - as Queen's brother Quinn was a favorite mount for her.. and of course Zoe has done a lot with her niece Elektra.

The mild fall weather is still with us.. I was thinking to put together a labyrinth for the horses to try - both under saddle and in hand. It's been quite awhile since I viewed the labyrinth work in a Linda Tellington-Jones video years ago. I kind of shelved the thought until recently-- it's a super tool and lots of fun for both horse and handler/rider.