OYY Jockomo will be 2 in February, 2010. So he's not a YOUNG boy, but he's not an old-timer either. He's had the basic training needed to get through life so far. This fellow is sort of a special project for me -- since I love his Mom OYY Tippateena and have had some truly wonderful times with her driving out on the back roads.. first with her by her mother's side- then with her pulling the cart all by herself. 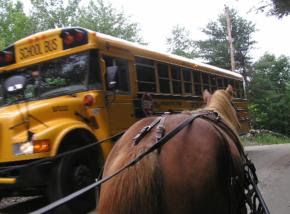 Here is Tippy with her Mom -- my daughter and daughter -in-law (her first time in a cart) posing for a photo before we head out. I drove Mom and Tippy around the dirt roads a lot - and when it was time for beautiful Tippy to go out alone- it really did seem as though she remembered certain mailboxes and other items along the side of the route.

I decided to breed Tippy to Chip -- pretty much knowing ahead of time what the result would be.. most likely bay, certainly Curly -- and whatever gender.. a beautiful ride/drive prospect. With some horses, you train and bond and are pleased 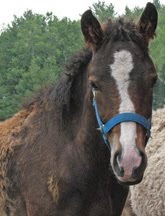 with the outcome. With Tippy, it is more than that - due to my marked affection for her-- I feel already a strong connection to her son.. who will be a personal project, more than just training a horse for sale. 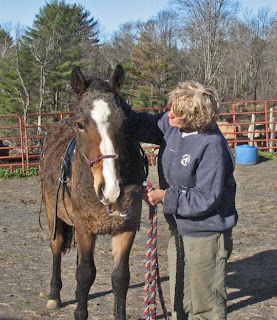 So Jockomo and I have started working with his ground training - and he's so smart !! Poor fellow is in a bit of an odd growth spurt -- his legs are too long, his head is big, and his huge ears are lending a mulish appearance... In short- he's a young boy only a Mum could love and believe how handsome he is.


I don't want to embarrass the young man by posting an unflattering photo - but here he is .. big ears and all.

He's such a blend of his Dad (Chocolate Chip), Mom, (Tippy) and Grand-mom (Teena).. it makes my job of teaching him so much more interesting and satisfying. 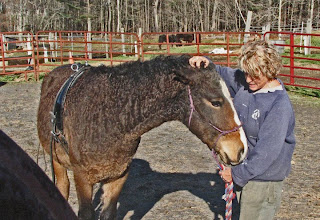 Jock got used to wearing the harness, belly band tight -- and me walking behind him instead of next to his shoulder. He did lots of neck/head bends, had the rope all over his body and legs. He has not had a bit in his mouth yet or worn a bridle. He a very fast walker.. he's going to be an awesome driving horse - and later on - a nice riding mount. 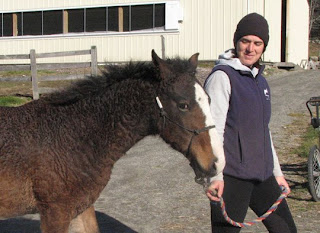 We changed a few horses around .. forcing some of the horses to make new friends in new pastures. Jockomo left his old group- where he was youngest - to become friends with one of the two boarders we have at the farm, where Jock will be the older mentor. This little guy just turned 1 years old - on Veteran's Day. He is out of Chip as well.. and he and Jockomo definitely look like brothers.. although Chester - as the young man is called - is far more elegant and nice looking. 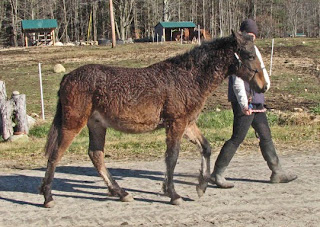 Even though he is not ours - because he lives here, I am firm about the manners and behavior he must have. We work with him on a regular basis - with tieing, standing, grooming, picking up his feet, leading -- all the things a young man should know to get through life happily. I also feel a bit obligated to spend time with him because his owners are not able to visit as often as I am sure he would like.
I'm looking forward to Jockomo's training and ultimate first hitch.. I love watching the family grow up and learn - Horses just blossom with a job and it's great to be a witness to and facilitator in the process.
And look at the gorgeous weather we continue to experience in late November !! Still in sweatshirts -- I remember maybe 6 years ago, a Thanksgiving Day I spent picking rocks in a T-shirt with a warm bright sun... maybe we'll see that again ?!
Enjoy ~
Posted by Top O' The Hill Farm at 8:30 PM