It's all in the family 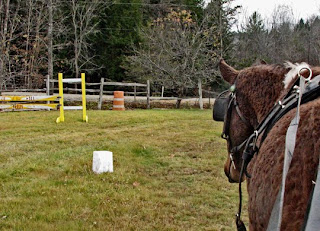 OYY Buster Brown just turned 3 in mid-October. Zoe and I have decided to get him prepared to be ridden and ultimately- he'll be part of the therapeutic lesson horse team. Both his Mom. his full sister, and his Grand-mom are therapy lesson horses.
I'm also going to get him driving. Buster did pull a cart back in winter, 2008.. he trained up rather quickly and we hitched him, drove him three times briefly-- and somehow he was shelved as a project.


Friday, he was fitted to a harness that fits him. He is wearing his grand-mother's bridle ! The bridle that matches this harness was too small. 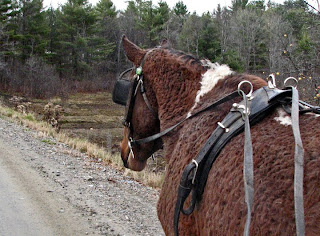 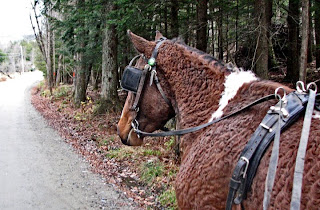 Buster and I met quite a bit of traffic - cars and trucks and we stopped and chatted with a neighbor for a bit. This fellow is going to be pulling a cart again in no time. Zoe can't wait to ride him, as he has been a favorite of hers since his birth.

Buster has driving in his DNA -- his Dad (Chip) is a super driving horse, Buster's Mom (Sudie Bee) is also a cart pony, as was his grand-mom (Teena) - the grand old lady who taught me how to drive years ago. Buster has many aunts that drive too and more than a few uncles ! Buster's full sister - OYY Sweet Bee was fitted for a harness on Wednesday of last week. She's a wonderful riding horse and an outstanding lesson horse - now -- soon -- she will also be a driving pony ! 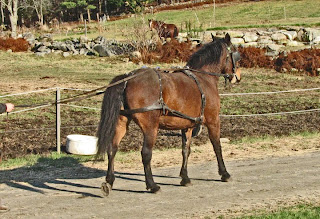 Sweet Bee and Buster don't resemble one another much. Buster takes after his Dad, Sweet Bee looks most like her Mom and grand-mother.

Sweet Bee is wearing her grand-mother's harness (which her two aunts also use when they are pulling the cart). I bet she could pull a fair sized log too.. and she is also a winning little dressage pony with scores over 70 every time ! This is what it means to be an "all-purpose" horse ! :) 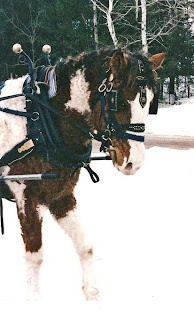 Just for fun - here's Buster's mother's full brother.
A great ride/drive large pony.
I have a lot of wonderful memories of driving - but this family is the biggest and the best when it comes to harnessed horses.
Enjoy ~
Posted by Top O' The Hill Farm at 8:05 PM