AhD and I left the house at the crack of dawn Sunday morning, headed out for our trail ride with friends. By the time we reached Poland and everyone saddled up, 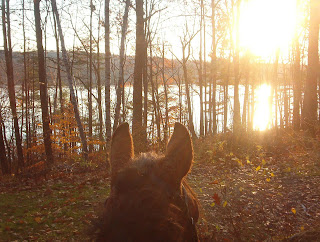 the sun was up over the lake. Sunday is a no-hunting day in Maine, so we were free to pick from the myriad of trails open to us. We trotted up the road a piece, 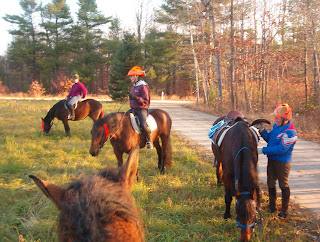 did some tack adjustment in a little field, and headed into the woods. I really am getting such an attachment to the woods at this time of year. 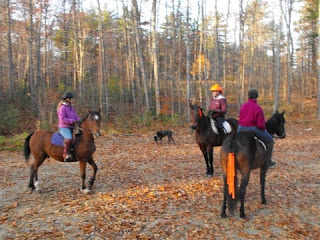 The trails were covered with rich brown leaves and the deciduous trees are mostly bare, except for a few golden beeches. The bare trees allow more light into the woods which shows many hidden nooks and crannies of beauty that are hidden at other times of year. 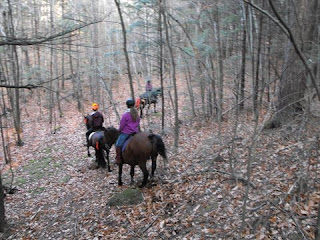 This hill is steeper than it looks 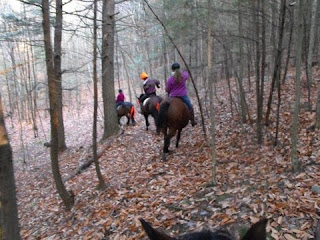 and required some manuvering and balancing skills.
My friend’s new Morgan Gabby was new to the group, so she and AhD had to check each other out. In the beginning of the ride, whenever we stepped up the pace a bit, AhD would make the whoop-whoop gelding/stud noise in his gut that signals, "I am excited, I'm sexy and I’m showing off." He was raring to go. When we stopped for a quick break, my handsome boy 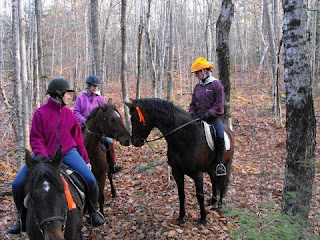 AhD did something that pissed off beautiful Gabby, so she kicked out at HIM hard ~ and got ME right in the foot. OUCH. But, I could tell nothing was broken, so my friends gave me the few moments I needed to shake it off, threw me a small pity party, and off we went again. Funny, AhD got the message Gabby was sending him, and after that there were no more whoop-whoop noises, head shaking, or pushing of the speed envelope. On about half of the trail we rode single file, 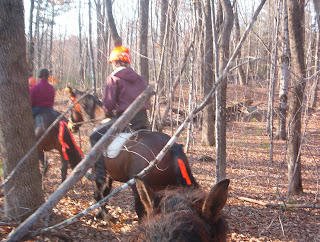 winding our way around trees and saplings, and crossing several brooks. The other half of the trail was similar to old county road, 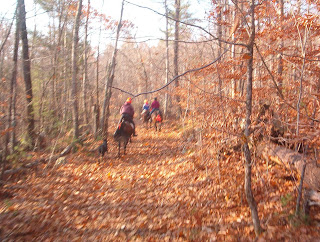 and we had some rollicking canters that were a blast! I actually held my camera up over AhD’s ears and tried a few action shots! (this is why above photo is blurry)We hopped over three downed trees laid right out at the perfect jumping distance on one of these trails. Wicked cool!
We stopped for a carrot break. 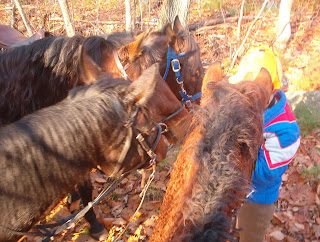 Everyone shared nicely and were very polite. On the way back, we spread out a bit just before hitting the big field, and then Gabby and AhD galloped flat out down the length of it. It was awesome!! They were pretty well matched in speed. It was thrilling to urge AhD on faster instead of holding him in. Back at the barn, I put AhD in our friends’ stall so that I could enjoy a vegetarian lunch. AhD took one look over the stall door to the large pasture where the three mares were, and promptly jumped it and took off like a big-a$$ bird, taking the door out of commission as he did so. It is one sturdy door, too. It took two of us to carry it out to my trailer. I brought it home for my carpenter husband to fix, but he doesn’t know it yet. :) I enjoyed my lunch with my friends, and when I hiked up into the pasture to collect AhD, he came right up to me, saying, "Where the heck have you been? I missed you!" Yah, right, I noticed the three mares all in a little bunch and Mr. Bigshot grazing quite a ways away. I hope they put him in his place.
Posted by Susan Lejonhud at 8:08 PM