Hunters were everywhere today, so we stuck close to home, very close to home, and never even left the winter paddock. AhD has been in an excitable and wild-eyed mood all week, but when I headed out to work with him today, I caught him napping on the ground with his buddy, taking advantage of the unusually warm November sun. They saw me coming and arose to greet me. 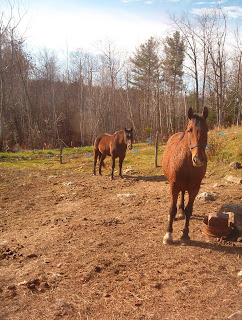 AhD was in a wonderful mood today ~ 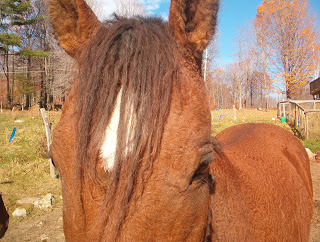 friendly, curious and pleased to be groomed and worked with. He was so gentle and loving, that I decided to forgo the groundwork that I had planned and jump right on to his warm, curly back instead. It took me three tries. AhD was very patient with me, and changed position to exactly where I wanted each time until I was successful. We tooled around the winter paddock, this way and that. I used the reins as little as possible and my seat and legs to cue him. We practiced lateral flexion, 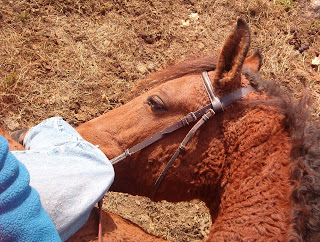 bending to the left and to the right. He was a pro at this! 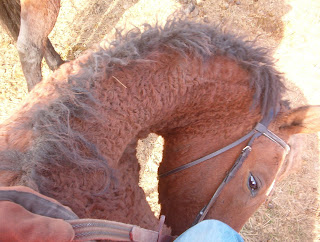 Look at this bend! and the calm eye, too. We practiced backing up, something AhD does not care for. He would tense up, and lift his head. I gave the gentlest cues I could, and rewarded even one step backwards. At first, he needed the verbal cue, "Back!" but he began to catch on to my non-verbal cues better as we went along. I was feeling mighty good about our session and decided to try it sans bridle. 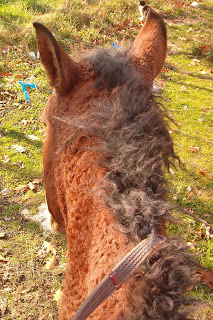 I leaned over and took the bridle off of his head, leaving the reins in a loop around his neck. AhD was listening to me so well, that we were able to do figure 8’s! Lumpy 8’s, but nonetheless, I was extremely pleased. And, he actually backed up better WITHOUT the bridle on than with it, so he was really in tune to me by the end of the session. I snuggled him afterwards, something we both enjoyed. 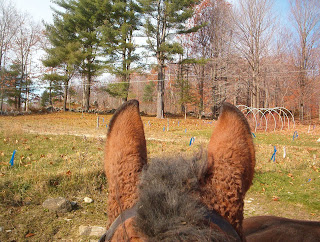 AhD cued me when The Great White Hunters (husband, son, nephew) were coming out of the woods behind our house. Here is our nephew

Jason (as in Jason’s Loop) who graciously not only allows me to ride on his trails, but makes new ones for me. We watch the Great Whites head 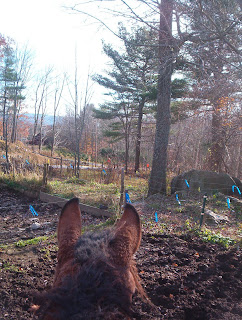 down the road for another hunt.
Turkeys do not bother AhD, whether they are across the pigpen from him or 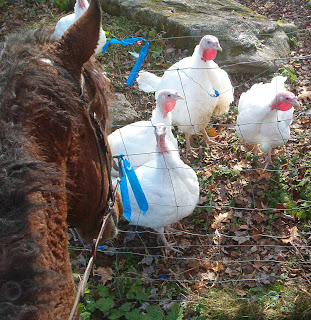 chirping near his feet. Maybe he recognizes kinship. :) But AhD was no turkey today, in fact far from it. Tomorrow is Sunday, and the hunters take a rest, so we are headed over to Poland for a ride with my friends. I’m ready!
Posted by Susan Lejonhud at 6:36 PM